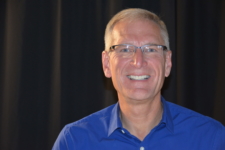 1 Praise the Lord. How good it is to sing praises to our God, how pleasant and fitting to praise him!

2 The Lord builds up Jerusalem; he gathers the exiles of Israel.
3 He heals the brokenhearted and binds up their wounds.
4 He determines the number of the stars and calls them each by name.
5 Great is our Lord and mighty in power; his understanding has no limit.
6 The Lord sustains the humble but casts the wicked to the ground.

7 Sing to the Lord with grateful praise; make music to our God on the harp.

8 He covers the sky with clouds; he supplies the earth with rain and makes grass grow on the hills.
9 He provides food for the cattle  and for the young ravens when they call.

10 His pleasure is not in the strength of the horse, nor his delight in the legs of the warrior;
11 the Lord delights in those who fear him, who put their hope in his unfailing love.

13 He strengthens the bars of your gates and blesses your people within you.
14 He grants peace to your borders  and satisfies you with the finest of wheat.

15 He sends his command to the earth; his word runs swiftly.
16 He spreads the snow like wool and scatters the frost like ashes.
17 He hurls down his hail like pebbles.  Who can withstand his icy blast?
18 He sends his word and melts them; he stirs up his breezes, and the waters flow.

19 He has revealed his word to Jacob, his laws and decrees to Israel.
20 He has done this for no other nation; they do not know his laws. Praise the Lord.

After an opening declaration to praise the Lord, Psalm 147 alternates between celebrating the Lord’s particular care for his people and his general kindness toward all creation. The God of all the earth is the same God who acts on behalf of his people, the Creator God is Israel’s God.

The Lord is in the gathering business. He loves to bring those who have been separated from Him back home again. In fact, he heals those who have become brokenhearted. They have been crushed by the circumstances of life. As a caring physician, PA, NP, nurse or medic does, so does God carefully treat the wounds of His people. God intimately knows and cares for His people.

The next verse speaks of God’s unimaginable vastness. “He determines the number of stars and calls each by name.” Recently, it was reported that NASA’s Hubble Space Telescope has established a new benchmark: detecting the light of a star that existed within the first billion years after the universe’s birth – the farthest individual star ever seen to date. The newly detected star is so far away that its light has taken 12.9 billion years to reach Earth. The research team estimates that it is at least 50 times the mass of our Sun and millions of times as bright, rivaling the most massive stars known. It has been given the name, Earendel, which means “morning star” in Old English.

The name of the star reminds me what Jesus said,

Revelation 22:16, “I, Jesus, have sent my angel to give you this testimony for the churches. I am the Root and the Offspring of David, and the bright Morning Star.”

Because this psalm speaks over and over the majesty of God in creation and His loving care for His people, we have abundant reasons to offer praise to the Lord.

Memory Verse: Psalm 147:3, He heals the brokenhearted and binds up their wounds.

Question(s) to Consider: How does this psalm make you feel about God? What affirmation about God’s character does it offer that causes you to offer wholehearted praise to Him?